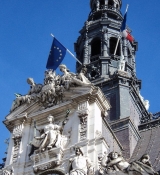 But the actual building with its Renaissance Revival architecture, which you have in front of you, was constructed in 1882.

On the frontage you will notice statues of important people for the story of the city of Paris:

On the square in front of Paris City Hall you will find lots of events to attend and enjoy during your Erasmus. Ice skating rink during winter, beach volley-ball during summer, football games and theatre projections, live musical performances on stage… are just a sample of activities that you can enjoy at Place de l'Hôtel de Ville!