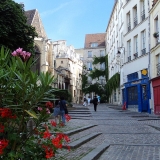 Apart from that "Le Marais" is a wonderful place to go window shopping or to wander around the food markets.

Take the line 1 metro and get off at the picturesque "Saint-Paul" metro stop. In "Saint-Paul" you will find traditional food shops like the chocolatiers and patisseries.
From this part of Le Marais, you can go for a walk along "Rue de Rivoli" towards "Châtelet district". "Rue de Rivoli" is the most important commercial street in Paris.

In a nutshell you will love the Marais district for:

A sample of the Marais district Paris:

How to get to le Marais district?