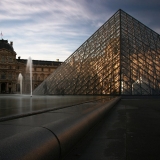 Before becoming what is now considered one of the most important museums in the world, Le Louvre was the official Royal Palace before Louis XIV decision to construct Versailles in 1674.

Le Louvre is also the biggest palace in Europe.

Le Louvre is recognized as one of the most important museums of our time.

It took approximately 800 years to build Palais du Louvre (as you may know, French people are always in strike and like to take their time at work ;D).

If you want to know more about the construction of the Louvre you should have a look here.

The history of the Louvre palace is fascinating, in its history it has been:

Today The Louvre is a museum, a commercial centre and an art school.

Inside Louvre's museum you will find art collections divided in several departments:

A Sample of Louvre Museum:

How to get to Louvre Museum: Musée du Louvre, 75001 Paris