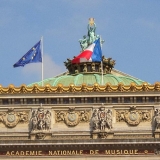 Inaugurated in 1875, L'Opéra Garnier is the best testament to the work of Haussmann and Napoleon III. Their renovation of the city created the Parisian atmosphere shaped by luxury during the delightful period of "Belle Époque" which is encapsulated in L’Opéra Garnier.

Inspired by Greek art, but not really Greek… Inspired by Italian art, but not so Italian, L'Opéra Garnier is typical of 2nd empire period (1850-1880) with its distinctive mix of Baroque style with Neo-Renaissance architecture.

The construction of L’Opéra Garnier was an enormous undertaking. When they wanted to make the foundations, workers discovered that there was a secret underground part of the River Seine beneath.
In order to construct the Opera and regulate the pressure of water, they created a giant subterranean lake directly under Opéra Garnier's building.

Not only is there water swilling under the floor of Opéra Garnier, but above, the roof makes honey! Thousands of bees live on Opera Garnier's roof in two beautiful hives, gathering pollen from Tuilerie's Garden and Palais Royal's flowers ;)

But Opéra Garnier is not only both historical building and a honey factory.
You can go to Opéra Garnier to visit the Opera or to watch a ballet.
For more information about which shows are played in the Opera, refer to the schedule of Paris Opera: Opéra Garnier and Opéra Bastille.

What to see outside the Opéra Garnier:

What to see inside the Opéra Garnier:

A sample of Opéra Garnier Paris: