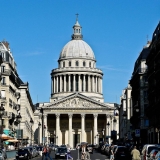 Paris Pantheon is a temple dedicated to commemorate important people of the Nation.

Before its civic vocation, the Pantheon in Paris was a church built by the King Louis XV. The Pantheon as a church was dedicated by Louis XV to Sainte Genevieve after his recovery from a serious illness in 1744.

The construction of the Pantheon was directed by architect Jacques-Germain Soufflot.

That's why Paris Pantheon is a mix between Greek-Roman style (look at the columns in the front) and French Gothic style (see the arched curved wall from the inside).

Main things to see and know about Paris Pantheon:

In 1791, two years after the French Revolution, the Pantheon became a civilian monument to honor very important people for the Nation.

Important figures you will find in Pantheon crypt:

On the main floor you will see paintings and sculptures dedicated to the church and to the Republic.

Under the cupola you will see Leon Foucault'sscientific demonstration that proves the earth is rotating.
This crazy shit is demonstrated by the constantly swinging motion of a pendulum. The pendulum never remains on the same level of the scale because its response to the Earth's rotation.

Paris Pantheon is definitely worth seeing ;).

A sample of Paris Pantheon:

How to get to the Pantheon: Place du Panthéon, 75005 Paris