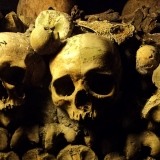 Les Catacombes de Paris are located in the former limestone quarries of Paris.

In the same period of the end of Paris limestone quarries utilization in 1780; the main cemeteries were "overcrowded", due to the huge amount of people buried there for public health reasons. Those cemeteries couldn't accept new tenant and they closed.

So from 1780 to the 2nd empire extensive urban development carried out by Haussmann in 1850 all bones from the city cemeteries were moved and stored in Catacombs.

By visiting the Catacombs you will see two main parts:

If you are in Paris the Catacombs are a place to see.

Already in the queue of Catacombs?
This will be your last time....look at the people getting in and never getting back....
Have a nice visit!

A sample of the Catacombes de Paris: