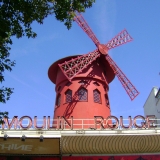 "Voulez-vous coucher avec moi ce soir ?"
Who hasn’t heard these words in their head when thinking of Paris?

It's probably one of the most popular French sentences known in the world. "Voulez-vous coucher avec moi ce soir" is the first sentence a lot of people learn in French, popularized by a song about the Moulin Rouge cabaret in Paris.
As you could guess this sentence is connected with the lusty entreaty conjures images of the cabaret entertainment, the 20th century French dance named Cancan and the movie "Moulin Rouge".

The Moulin Rouge Paris was built in 1889 during the euphoric period called "belle époque" characterized by industrial economic and cultural growth.
Le Moulin Rouge was the entertaining place of "belle époque" where you can have fun, live your life freely and let your problem goes.

Created as a hotspot for the Parisian Bourgeoisie this place has been described as "just a bit kitsch".
In the garden at the Moulin Rouge you would be able to see an Elephant.
And during Moulin Rouge cabaret shows there were monkeys playing music.
The guests of the Cabaret would enjoy a night of merriment. Glass after glass of champagne, it was never ending unless they found themselves on the floor in drunken stupor.

So what about the naked girls, the French Cancan and the words "Voulez-vous coucher avec moi ce soir"?
Hold on, I’m getting there!

As you can imagine, in 1889 people weren't going on holiday to the beach to watch girls in their bikinis.
It may be hard to imagine but even the "lazy French" didn't have holidays at that time!

Women wore long dresses with tons of fabric and giant grandma panties.
I can only agree with what you are thinking, this is totally unsexy.

But as it was the flourishing period called the "Belle Epoque" artist's become richer. And I'm sure you've noticed that you always have naked chicks somewhere in artist's paintings, statues, books…
So the silhouette of women's body was in all artists' conversations.

Founders of Moulin Rouge saw an opportunity to profit and decided to put on a show that would be the first palace of the woman’s body.
French Cancan, black stockings, garters, petticoats and other sexy fashions made these shows a huge success.

As for a quick notice, the provocative "sexy side" of the French Cancan has its origin in the French revolution.
Girls who wanted to defy authority would perform the Cancan dance and showing their knees and legs to show that they were free from royal power and religious rules.
When the dance was invented it was called only the "Cancan". It was the foreigners who started to call it the "French Cancan".

To mention the most famous:

Now it's time to grab your camera and get your picture there.

And girls remember that you are in France, as Pitbull said "let's enjoy life" so don't be surprised if you got proposed for some "Voulez-vous coucher avec moi ce soir?!!!" ;D

A sample of the Moulin Rouge Paris: