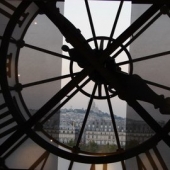 Inaugurated for the Exposition Universelle of 1900, such as the Eiffel Tower, Orsay Museum was in the former a train station who connected Paris to Orléans, Bordeaux and other southern city to Paris.

That's why when you enter Orsay museum; it feels as though you should be boarding the train.

Because the platforms of Orsay Train station were unsuitable for modern train, the traffic stopped in 1940.

In the year 1977, the Orsay train station got the vocation to become a museum.

Inside Orsay Museum you will see:

A sample of Musée d'Orsay Paris: