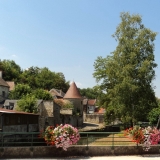 Located in the North East of Paris in only one hour, La Ferté Milon will amaze you with its look of a small village and its stone houses.

If you live in Paris, going to La Ferté Milon during a week-end day for a picnic is the perfect place to clear your mind and forget about the noisy stress of the city.

Apart from being a relaxing place near the Canal de l'Ourcq, La Ferté Milon is a quite famous city because it's the city where Jean Racine, the French dramatist, was born and grew up.

If the French language got its place on the world scene language, it's for sure thanks to the work developed by the French Academy.

Main things to see and do in La Ferté Milon:

Take a sunny day of your week-end to discover La ferté Milon!

A sample of La Ferté Milon:

Discover more of France on www.erasmusofparis.com